“More than 76 % of the Indian large population is below the poverty line. Despite the rise of per capita income there exists vast economic and social inequality. India’s dense population is one of the greatest challenges on its way to progress and development. However this dire situation can be overcome if coercive efforts are put in by the public and private sector to bridge the gap between the affluent and marginalized of our society. Even the private sector needs to engage itself in more social business and a company law should be introduced for the corporates to adopt rural villages a part of CSR.” said Hon’ble Dr. M. Veerappa Moily, Union Minister for Corporate Affairs during the release of the book “Law Poverty and Development” authored by Maj. Gen. Nilendra Kumar, Director, Amity Law School, Noida and Advocate Mr. Kush Chaturvedi at Amity University Campus, Sector -125 Noida. Dr. Moily further added that the population rise in India can become the demographic dividend in another thirty years and the population can be transformed into the asset of the country. Poverty should not be taken for granted in India and per capita income of any country should be judged with the way it handles its poverty” averred Dr. Moily.
Delivering the key note address during the book release function Justice Mr. K.S Radhakrishnan, Judge Supreme Court of India said “The constitution of India is one of the best Constitutions in the world as it has numerous provisions to safeguard the interest of the weaker section and minorities in the forms of various National Commissions. However the challenge lies in effectively implementing all of them and the optimum implementation of these provisions is the key to holistic progress of the country. Therefore every citizen should engage in contributing to social equality in whatever way possible in order to sew the thread of equality and fairness in the Indian Social fabric. He averred that social service should be made compulsory for the youth to serve the poor and Socio Economic Legislations like Right to Food and Right to Shelter should be introduced to elevate the living conditions of the marginalized.Wishing great success to “Law Poverty and Development” and hoping that it will ignite a flaming sense of responsibility in India’s legal system to eradicate the chronic problem of poverty from the country Dr. Ashok K Chauhan, Founder President, Amity Group said “In a world, where poverty and marginalization of vulnerable groups are on rise, it is necessary to stress on the particular importance of the right to development”. While sharing with the audience the concept and objective of the book Maj. Gen. Nilendra Kumarinformed that Law, Poverty and Development is one of the subject papers prescribed by Bar Council of India for the LL.B syllabus in Bar Council of India rules and this book is a wholesome effort to discuss the law relating to poverty, which have been covered in four distinct modules of Understanding poverty and development, Constitutional guarantee for the poor, Criminal justice system and the poor and Impoverishment of women, children and disabled persons. He further said “the subject of income distribution is not any separate from the functioning of Law and Order. Poverty is a problem of international human rights law. Therefore, poverty under International Human Rights Law can be seen as violation of civil, political, economic, cultural and social rights, which requires a legal commitment from each of the responsible actors and entitles the poor people as the right holders to pursue their rights.” Also present during the book release function were the Mr. Kush Chaturvedi, Co Author of “Law Poverty and Development”, Dr. Manish Arora, Director, Universal Law Publishing Co,HOIs, faculty and students from various institutions of Amity along with other distinguished guests.The release of the book was followed by the felicitation of the esteemed guests by Dr. Ashok K Chauhan.The other books authored by Maj. Gen Nilendra Kumar Singh include ‘Military Law Lexicon’, ‘Military Law Handbook for Commanders’, ‘The Armed Forces Tribunal Law’, ‘Law relating to The Armed Forces’,’ Courts Martial Under Scrutiny’,’ Disability Benefits in the Armed Forces’,’ Case Studies on Military Law’,’ Military Law then, now and beyond’, ‘Nani Palkhivala - A Role Model’, ‘A to Z of Law for Management Students’ and ‘Courts Martial and Military Matters’. 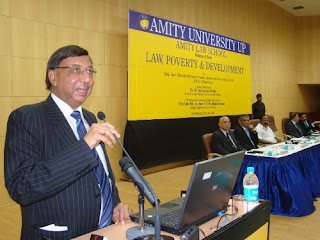 Posted by Amity Law School at 2:40 AM