The next dates for the UG Camp are 22nd to 26th Feb 2012.The remainder students of the 4th sem would be required to attend. The mentors may inform them accordingly and advise them to submit indemnity forms duly filled.

Those from the 6th sem who are keen and  volunteer may also be allowed to avail the camp.

Do you like to hog the limelight? Do you think that you have what it takes?

If you believe that you have the gift of the gab and the ability to captivate the masses through the nuances of your speech, then here is your chance to prove your mettle! The cultural committee of the Amity Youth Fest 2012 announces auditions for compering the cultural events of this three day extravaganza!

The platform has been laid, the opportunities are approaching, so come and make your presence felt!

Posted by Amity Law School at 12:13 PM No comments:

The Bill for analysis Media council Bill, 2011. Entry for maximum two students ( individual performance) from one Law college is expected on or before 30th Jan 2012. Entry fee per student is Rs 100 only

--
Posted by Adhish Sharma
Posted by Amity Law School at 1:32 AM No comments:

This is once in lifetime opportunity that one can ever dream of. Calling all the future makers of India to get as close as it can get perspective of policy making in India. An equivalent of Whitehouse interns program for Indian students, one of the most sought after Fellowship, Legislative Assistants for Members of Parliament (LAMP) is here. The last date to apply is February 26, 2012 – hurry!
About PRS Legislative Research: - PRS analyses legislation and provides non-partisan research inputs to Members of Parliament on legislative and policy issues.  In addition, it is the only organization to track and collate data on the functioning of legislatures and legislators in India. The PRS staff comprises a dedicated team of professionals with different areas of expertise including law, economics, political science, engineering and communication. I would say PRS has put together a dream core team – have a look to see for yourself.
About Fellowship: – The Legislative Assistants for Members of Parliament (LAMP) Fellowship, an initiative conceptualised by PRS Legislative Research, targets exceptional young Indian citizens who are seeking opportunities to widen their understanding of the nature of politics and policy making in India. Each Legislative Assistant is assigned to an MP, to provide quality research support for their legislative and oversight duties. The LAMP Fellow will help MPs frame Parliamentary questions, raise issues, participate in parliamentary debates and speeches and help prepare for committee meetings.
Who can apply: - PRS seeks to engage with highly-motivated, bright young people for the LAMP Fellowship. Candidates from all backgrounds are welcome to apply. Applicants must meet the following criteria:
Application Deadline: – February 26, 2012 (extended!)
Location: - Delhi, India
Duration: - June 2012 – May 2013 (~10 months depending on parliamentary schedule)
Stipend: – INR 15,000 / month along with an additional amount of a lump sum of Rs. 3,000 to cover any expenses (such as local conveyance, telephone calls, internet charges etc) incurred.

Posted by Amity Law School at 1:19 AM No comments:

Jitendra Chauhan College of Law, having a base of more than 700 students is organizing a two-day annual national event, LAW TRYST on the 25th and 26th February 2012. The main objective of Law Tryst is to provide a common platform to the students for creating awareness about the different facets of Law through an interactive and interpersonal approach. We intend to achieve the said objectives through events that are Law-based, Challenging, Competitive, and yet Entertaining and Educational.

--
Posted by Adhish Sharma
Posted by Amity Law School at 1:13 AM No comments:

Welcoming the august gathering, Maj. Gen. Nilendra Kumar, Director, Amity Law School, Noida said that Law reforms are the talk of the day and it is much needed in Indian context. Most of the laws are century old and need to be revised. Maj Gen.Kumar shared that the competition on law reforms will inculcate in students an expertise to frame laws and also to undertake suitble drafting capabilities. Their knowledge of laws and constitution will be tested by bench of three or more judges invited to assess them.

Addressing the august gathering, Dr. Balwinder Shukla, Officiating Vice Chancellor, Amity University, Uttar Pradesh remarked that this competition will serve as a test of legal proficiency and will provide enlightening thoughts on legal reforms to the participants.

Inaugurating the Competition on Law Reforms, Hon’ble Mr. M.C. Bhandare, Governor of Odisha while sharing his views on the importance of Law Reforms said that every party should have atleast 50% women in power. Hon’ble Mr. Bhandare said that till last century men were considered superior because of physical power but in present times brain power is more important and nature has given the equal brain power to both men and women. There fore women should be given equal opportunity and considered more superior. Speaking to the budding lawyers, Hon’ble Mr. Bhandare said that law being a noble and learned profession, students should adopt integrity, independence and industry as the main factors to be successful and four Cs i.e. Corruption, Communalism, Cste, Criminalization should be eradicated in order to have stability of the party and a stble government Refering to the upcoming Uttar Praddesh Polls, he advised the voters to be sensible while voting and vote for those parties who have proved themselves stble. Laying on the needs of the value based education, he emphasized on love, compassion and patriotism to be part of education.

Mr. P.P. Rao, Senior Advocate, Supreme Court while addressing the budding lawyers as to how they can become good lawyers said that it is the law that brings the social order and advised students to compete with a sportsmanship spirit and find out new ideas as to how electoral reforms can be implemented in this country. Talking on the recent election to be held in UP, he is of the opinion that candidate who gets 50% plus 1 vote should be announced a winner rather than ones who win with 15-20% vote only.


--
Posted by Adhish Sharma
Posted by Amity Law School at 7:10 AM No comments:


--
Posted by Adhish Sharma
Posted by Amity Law School at 7:42 AM No comments:

The School of Law, Christ University invites contributions on current and contemporary issues of law for the inaugural peer-reviewed edition of its law journal to be published in March 2012. The journal is an effort by the Journals & Publication Society to promote and encourage legal research and writing in the legal community.

Submission Guidelines:
Submission to the Journal can be made by e-mailing a copy of the manuscript or by posting the hard copy of the same.
We encourage authors to submit their manuscripts in Microsoft Word Format and to use gender neutral language.
The manuscript must not bear identification of any kind.
The manuscript must be accompanied by an abstract, not exceeding 300 words.
The submissions to the Journal can be made through e-mail or sending by post. In case of post or courier, all manuscripts must be addressed to:

In case of submission through e-mail, a copy of the manuscript should be mailed to journals@law.christuniversity.in

COVERING LETTER: All submissions, both hard and electronic copies, must be attached with a covering letter mentioning the name of the author, occupation, title of the manuscript and contact address, for future reference.

--
Posted by Adhish Sharma
Posted by Amity Law School at 8:58 PM No comments: 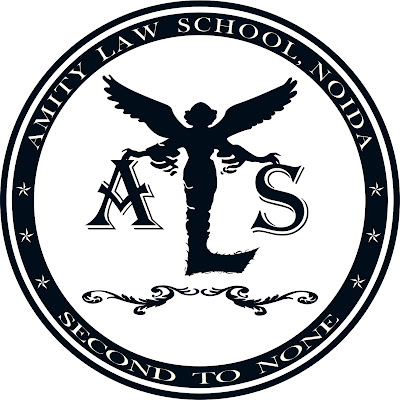 Posted by Amity Law School at 9:45 PM No comments:

Trials will now be held on 9th Jan 2012 instead of 13th January 2012 due to change in registration date. The dispute for the trials will be given to the participants on the spot and shall be based on contract law.

Selections for the UILS National Client Counseling Competition – 2012 being held in University Institute of Legal Studies (UILS), Panjab University, Chandigarh from February 3rd – 4th, 2012 will be held in ordinary course on 13th January 2012. The dispute for the trials will be given to the participants on the spot and shall be based on contract law.

All students interested may kindly register for the trials with the moot court society at mcs.alsnoida@gmail.com.

--
Posted by Adhish Sharma
Posted by Amity Law School at 10:15 PM No comments:

The Moot Court Society announces GRAND INTRA TRIALS 2012 from 12-17th January 2012. The rules for the same are available here. The MCS invites comments and suggestions for improvement on these rules till 5th Jan 2012 11.59 pm.

All students interested to participate in the GRAND INTRA TRIALS 2012 must register with the moot court society atmcs.alsnoida@gmail.com latest by 10th Jan 2012 11.59 pm.

For any queries or clarification, please contact the Moot Court Society at mcs.alsnoida@gmail.com or on our facebook group Amity Law School, Noida.

Moot Court Society wishes the all the very best to the participants.

Rules can be found here: https://docs.google.com/open?id=1a-yVRpIkHSIfA9vvwmqcJDf7b_MzIe5by-14hEhGZnbzJnZTOpOvGR7m-3es

Posted by Amity Law School at 8:15 PM No comments:

Thomson Reuters, Legal has launched an innovative programme to empower the community by using the power of information.  Therein they have launched a competition where students are invited to present their own original plans to create a Community Connectivity Progoramme to connect with and engage with the people of Uttarakhand.  Entries would be accepted in English or Hindi by individual students or a team of up to five students.  First, Second and Third Prizes are Rs. 1,00,000/-, Rs. 50,000/- and Rs. 25,000/- respectively.  Last date for submission of entry is 31stJanuary, 2012.

Please see their posters on the notice boards.

--
Posted by Adhish Sharma
Posted by Amity Law School at 7:11 PM No comments:

National Seminar on Management, IT, Law, Education and E.T.E.

A two days National Seminar on Management, IT, Law, Education and E.T.E. on 24th January, 2012 is being organized by Ideal Institute of Management and Technology & School of Law in Kakardooma Institutional Area, Delhi-92.  There are five different themes relating to Law on which papers may be presented.

--
Posted by Adhish Sharma
Posted by Amity Law School at 7:09 PM No comments:

Papers/Registration forms for all above are held with Dr. J.S. Nair/Moot Court Society.  Those interested to please note.

5.   Army Institute of Law, Mohali will hold a conference on Business and Commercial Law on 18th and 19th February, 2012.  Papers are to be submitted by 6th January, 2012 on various things that would be subject matter of four technical sessions.  For further details, please contact Dr. J.P. Yadav.
6.   Gujarat National Law University, Gandhinagar has called for papers for the scholar edition and the student edition on different themes, as indicated on the poster displayed at the notice board.  Last dates for submission of abstract and full papers are 7th January, 2012 and 7th March, 2012 respectively.

--
Posted by Adhish Sharma
Posted by Amity Law School at 7:08 PM No comments: