Legal Entrepreneurship Clinic of Amity Law School, Noida is organizing a workshop on Investor Awareness and Companies Act 2013 in Association with the Institute of Company Secretaries in India on 6th February, 2014 at 11.00 am in the Legal Aid Room, I-2. There is no Registration Fees for the event, and the entry is open only for the first 100 applications. To register for the event and any other inquiries, contact the undersigned:-1. Priyan Garg- 95821443772. Avinash Krishnan Ravi- 96500153303. Tushar Agarwal- 9971374150
Posted by Amity Law School, Noida at 3:58 AM No comments:

Amity Law School, Noida is organizing a Quiz Competition on Law of Contracts titled 'Lex Contracts' on 7th February, 2014 at 11.00 am in I-2 Block. The first round would be a mcq question paper with 30 questions and the next round would be a buzzer round. Each team would be consisting of two members. The Registration Fees for the event is Rs. 200 per team and the entry is open only for the first 100 applications. To send in your confirmations, please mail on lexcalsn@gmail.com with names and telephone numbers. Participation Certificates would be given to everyone. To register for the event and any other inquiries, contact the undersigned:-Priyan Garg- 9582144377Shorya Jaipal- 8800425768
Posted by Amity Law School, Noida at 3:57 AM No comments:

Email ThisBlogThis!Share to TwitterShare to FacebookShare to Pinterest
Labels: AYF

This is to inform the students interested in the proposed trip to US in mid May, 2014:1. A week long trip is planned to Ave Maria School of Law at Naples, Florida.The exact dates would be decided later.2. The salient features of the visit are as under. Tentative cost USD 3,260 per student (about 2 Lakhs in Rs.)

3. Academic contents/lectures/round table/seminars on five days from 0900 hrs. to 1330 hrs. on following topics by expert speakers.

5. Breakfast, lunch and refreshments (all days)

6. Dinner on two days (one day at Sophia’s and the other day Banquet at Vineyards Country Club)

11. The students would be issued a certificate for having attended one credit course.

12. The cost does NOT include:

a) Airfare from or to India
b) Visa
c) Travel insurance
Posted by Amity Law School, Noida at 3:56 AM No comments:

We are glad to inform that a team comprising of Mehaq Rao and Nikita Tanwar won the second prize in a Debate Competition organized by University School of Law and Legal Study, GGSIP on 27 January, 2014. This achievement is not only praiseworthy but also highly commendable.
The Group Vice Chancellor has also conveyed his deep appreciation for their excellent performance in the above competition. Heartiest congratulations to the team and may they get more laurels for the college.
Posted by Amity Law School, Noida at 3:54 AM No comments:

Email ThisBlogThis!Share to TwitterShare to FacebookShare to Pinterest
Labels: AYF

We are glad to inform that a team comprising of Sukriti Kashyap,Anu Singh & Mitash Charan qualified till the Quarter- Finals of 3rd NALSAR GST Memorial Criminal Law Moot Court Competition, 2014. Mitash Charan won the 'Best Researcher' award with a cash prize of Rs. 5000. Heartiest congratulations to him. The competition comprised of teams from all over India, with all the top national law schools participating.
Posted by Amity Law School, Noida at 7:57 PM No comments:

ALS, Noida is organizing a workshop on 'Interview Preparation & Resume Writing' for the 8th Semester. The workshop would be conducted in the Legal Aid Room:
Session 1 : Preparation from the candidates end –conducted by Ms. Garima Wadhwa
Session2: the employers perspective-conducted by Ms. Jyotica Bhasin(Partner, Bhasin& Bhasin)

It is expected that the above training program will contribute to better placements.

Posted by Amity Law School, Noida at 8:16 PM No comments:

Posted by Amity Law School, Noida at 7:00 AM No comments:

Amity Institute of Information Technology is organizing a Documentary Showcase event for students as the part of Amity Human Values Quarter 2014.
The purpose of this competition is to encourage creativity of students and cultivate Human Values.
You are requested to kindly disseminate the information among the students to submit their documentary on URL: HTTP:/TINYURL.COM/AHVQDS till January 28, 2014 at 5.00 P.M.
For further query contact to:
Faculty Coordinator:  Ms. Kanchan Hans, 9818657364
khans@amity.edu
Ms. Jyoti Khurana, 8882122930
jkhurana@amity.edu
Student Coordinator: Mr. Mayank Dixit, 8800788787
md.0072@gmail.com
Ms. Nehal Goyal, 8860397875
nehal.sweet17@gmail.com
Posted by Amity Law School, Noida at 7:32 PM No comments:

Posted by Amity Law School, Noida at 7:00 AM No comments:

CUTS Institute for Regulation & Competition (CIRC) as an institute and research organisation, has been actively contributing towards enhancing knowledge on competition and regulatory issues in the developing world. It is therefore with great pride we announce the First National Level Essay Competition on two themes:


We have partnered with Society for Indian Law Firms (SILF) and Services Export Promotion Council (SEPC) as Principal Partners and with National Law University, Delhi (NLUD) as Institutional Partner.  Lex Witness is our official magazine partner for this competition.

We formally invite applications for the same from your institution and request you to kindly place the accompanying poster (attached) appropriately on your notice board and disseminate the information among the students. We wish to receive as many applications from your institution and hope that they may win coveted accompanying awards. The last date of submission of the Essay’s is 15th March,2014. You can also visit the link http://www.circ.in/essay-competition-2014.html for further details. 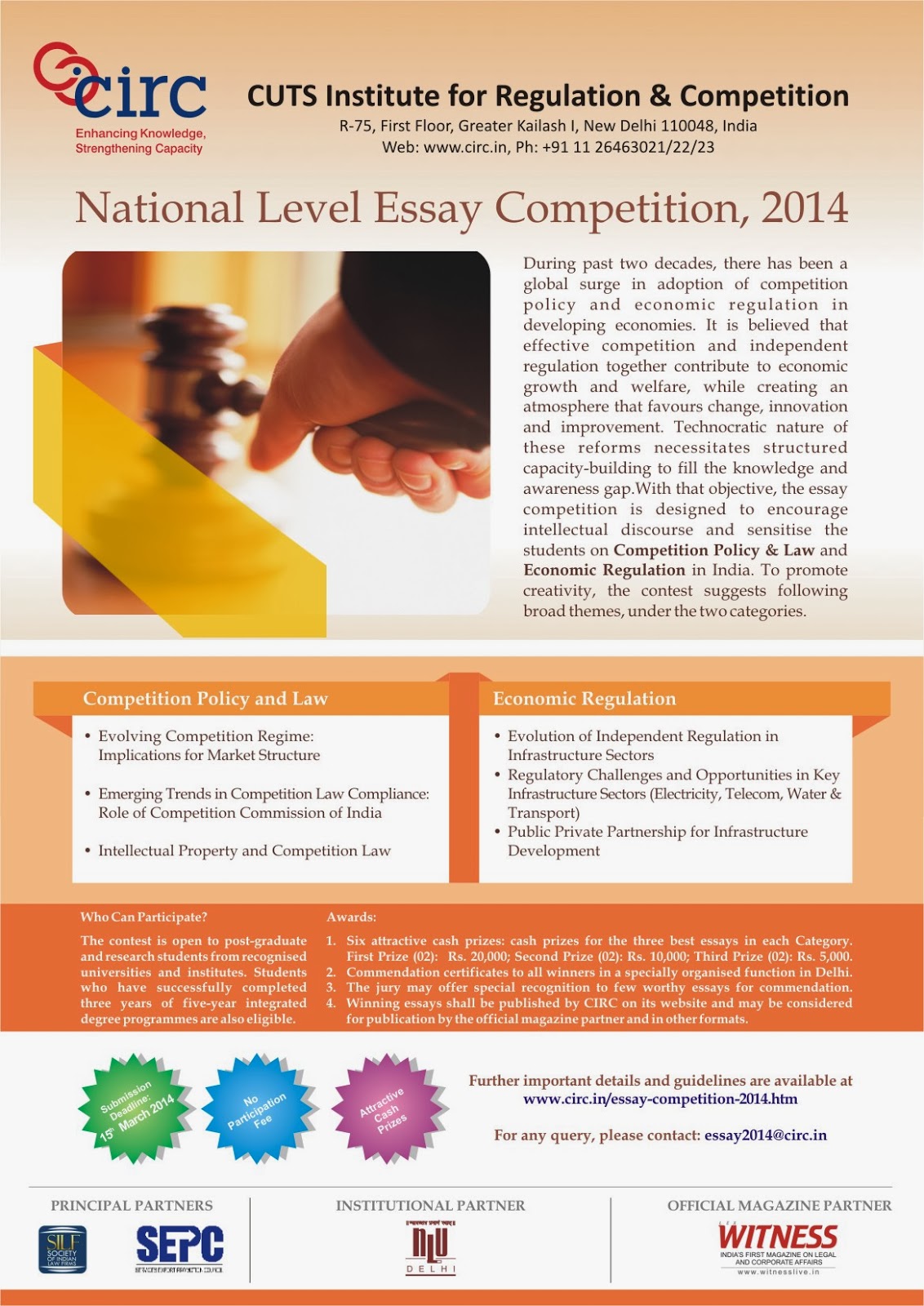 Posted by Amity Law School, Noida at 9:04 PM No comments:

A legal essay on 'Information Technology and Governance' by Mr.Suvir Raghuvansh, 8th Sem (B.A. LL.B) has been selected among 14 highly commendable contributions in the Legal Essay Competition organized for Volume III of the Law Exam Times. We congratulate him on his achievement and may he bring more laurels to the college.
Posted by Amity Law School, Noida at 11:57 PM No comments:

Aiman Kulsoom Rizvi (B.A. LL.B 6th Semester) has won the First prize in the 'Extempore Competition' organized by the Literary Society, AIESR on 16th January. Shwetank Sharma (B.A. LL.B 2nd Semester) won the Second prize in the same competition. We congratulate them on their spectacular achievement and may they bring more laurels to the college.
Posted by Amity Law School, Noida at 1:16 AM No comments:

This is to inform the 2009-14 batch about a paid internship opportunity at RSG Media Systems. It designs innovative enterprise applications for major media and entertainment industry clients and other intellectual property owners. We provide software products and services that enable our customers to more profitably manage the evolving media landscape. Our clients include MTV Networks, Discovery Communications, Turner Broadcasting, the NBA, Major League Baseball, NBC, Wall Street Journal, Lifetime Television, Travel Channel, among many others. We are rapidly expanding and looking to recruit A-Players for our team worldwide. Interested students may send resume to Ms. Ruchi Sharma at rsharma10@amity.edu

Qualifications
§  Strong command of the English language – written and verbal.
§  Bachelor’s degree from a reputed Law institute.
§  Total experience in the area of Contract drafting: 0-1 years

§  Excellent problem solving skills. Must be able to think creatively about issues to find a resolution
§  Should have displayed quick learning abilities in career
§  Must have knowledge of Intellectual Property Rights domain
§  Ability and confidence to work with all levels: senior management and staff
§  Should be willing to travel
§  Knowledge of the media, cable, and broadcasting space is desirable but not required
§  Experience of working in onsite-offshore model is desirable but not required
§  Technical writing skills and facility with Visio and PowerPoint are required

Posted by Amity Law School, Noida at 10:44 PM No comments: 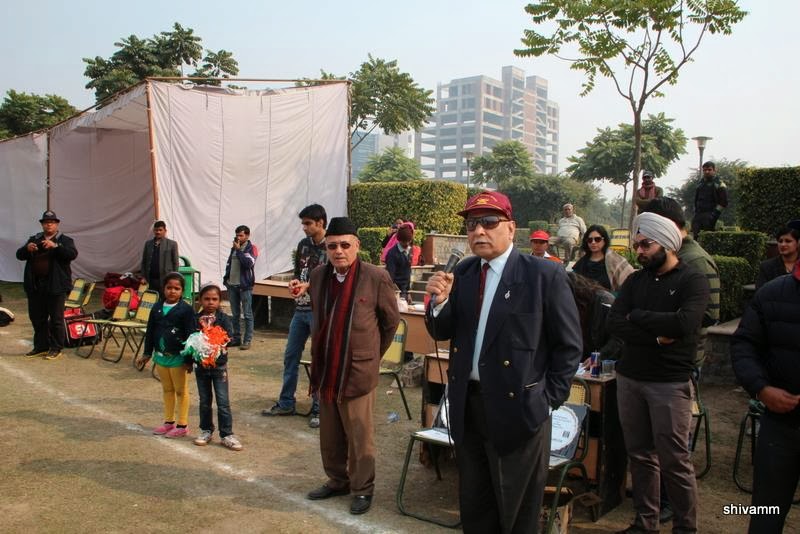 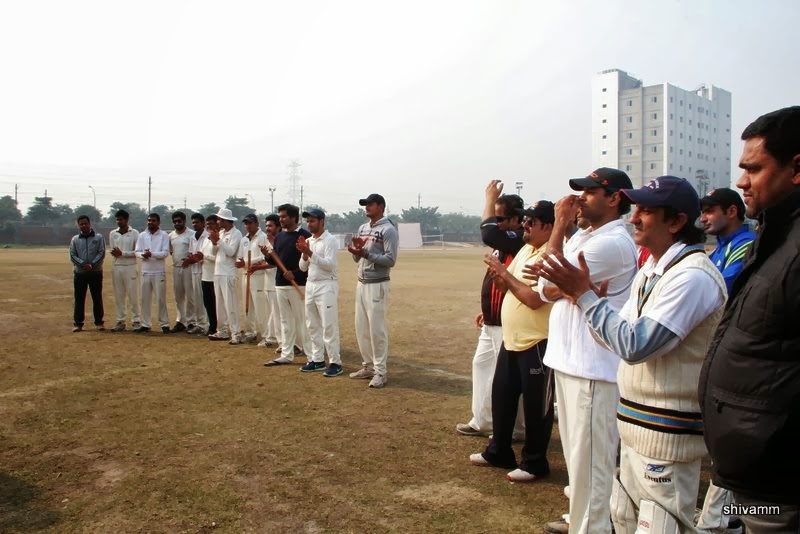 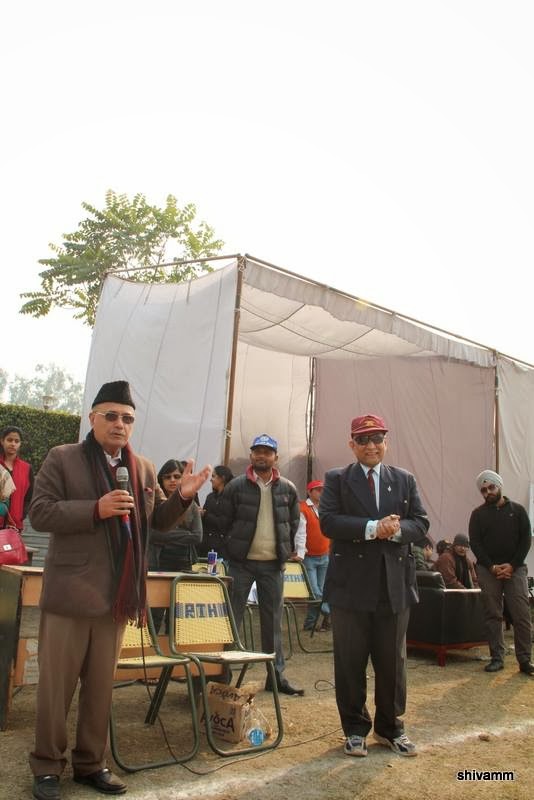 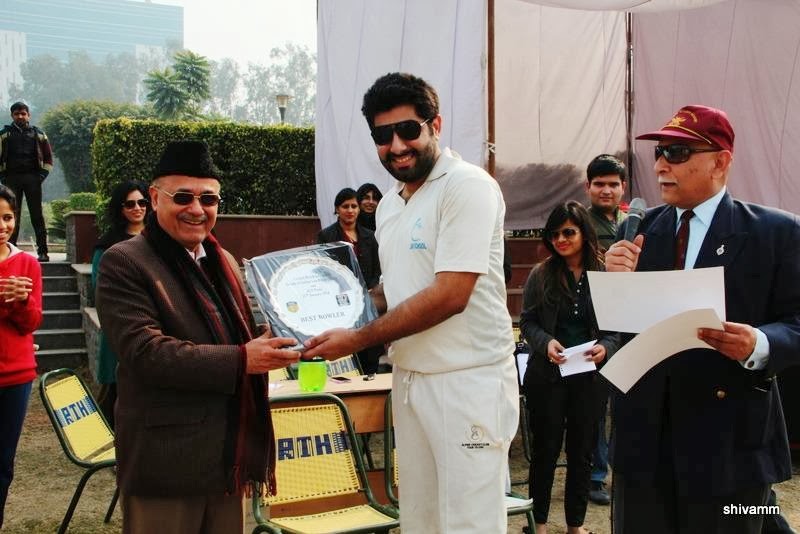 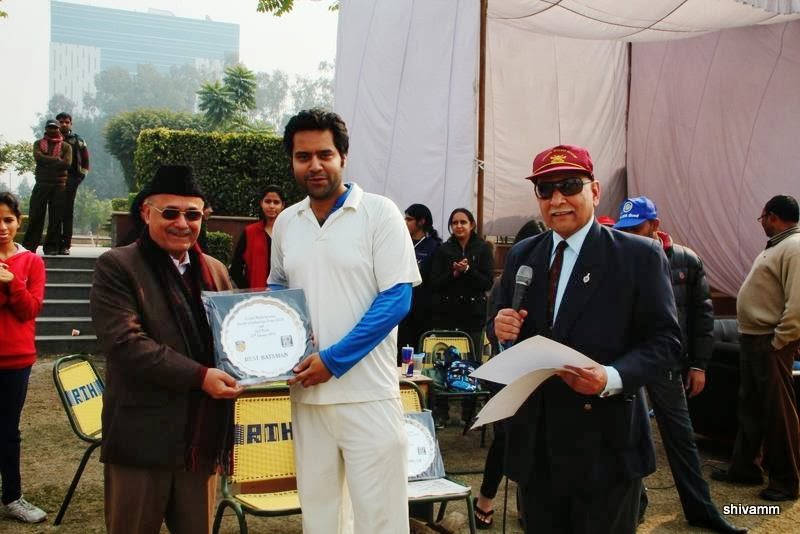 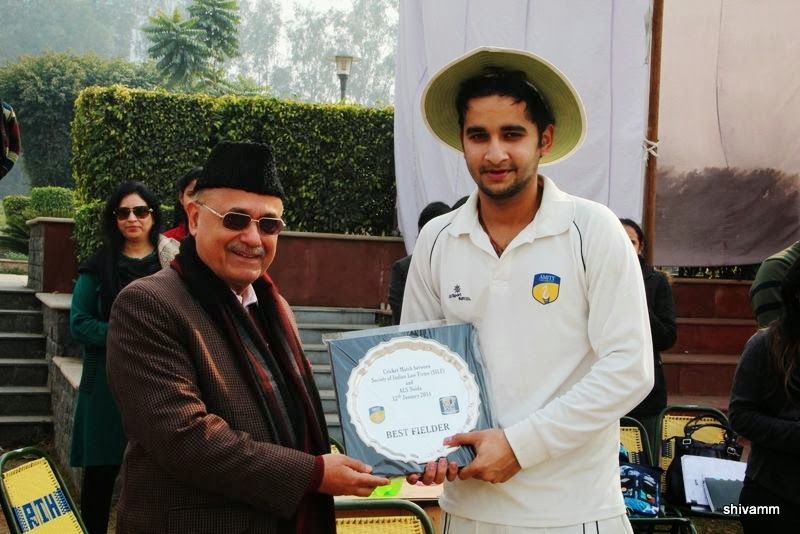 Posted by Amity Law School, Noida at 3:32 AM No comments:

1. AMITY HOSTEL TALENT HUNT is being organized for the third year in succession. The concept of a Talent Hunt was introduced to provide the hostellers a platform to showcase their talent in different categories.

Seminar on Current Issues and Challenges before Forensics in Law

This is to inform that Amity Law School Noida is organizing a seminar on 'Current Issues and Challenges before Forensics in Law' in the month of March. The theme and sub-themes are molded to bring forth a discussion on the challenges being faced in the field of forensics with respect to law, develop a deeper understanding into the issue, create solutions to tackle those problems in the field of forensics. The topics would be ranging from computer forensics, DNA analysis to medico-legal consultancy, environmental forensics etc. The purpose of this seminar is to spread the awareness pertaining to new social trends, legislations, identification of lacunas and suggestions regarding their remedies and measures which will help in improving the criminal justice system.

Students interested to volunteer for the event are invited to attend a meeting on 13th January (Monday) at 1 pm in the Legal Aid Room and register on tanyasinghal900@gmail.com. For further details contact:

Posted by Amity Law School at 11:40 PM No comments:

The Moot Court Society kick started the new year by organizing the Grand Intra Trials (Winter Edition) on 9th January, 2014. Moot Court is one of the primary modes of clinical legal education which prepares law students to face actual courtroom work, whose performance is adjudged by bench of judges. This trials problem tested the students on Constitutional law involving a Public Interest Litigation on the 'Rising Inflation' in the country of Kindia. Students from various semesters argued their case before a bench presided by the 3 most eminent faculties of Amity Law School.

A total of seven teams entered into the battle of words, which saw a maximum spectators from the 1st year of 5 year and 3 year courses. Ms. Tanya Chaudhry (6th Semester) was declared the Best Speaker for the event and Ms. Chitwandeep Kaur (2nd Semester) bagged the Best Researcher award. The event was brilliantly organized and coordinated by the MCS team comprising Tanisha J.Munir, Ramaditya Tiwari, Anurag Andley and Abhinav Mishra under the guidance of Ms. Bhavna Batra.

This is to inform the 2008-13 batch about a job opportunity at Intellevate India Pvt. Ltd. Interested students have to send their resume to Ms. Ruchi Sharma at rsharma10@amity.edu immediately. (as this is an urgent requirement)

Please find attached the details below.

Its a contractual job for three months as of now  ( which may be extended depending on the requirement/performance ).
Please find job description as below:


Posted by Amity Law School at 9:24 PM No comments: